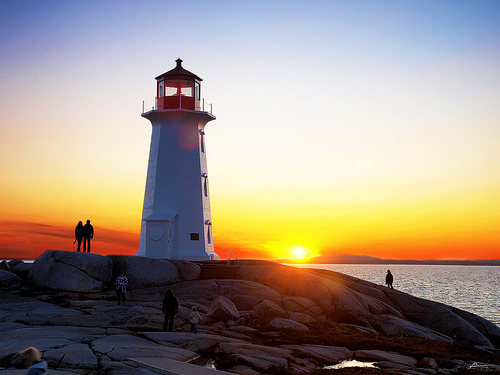 It’s been a fun month for me, going away for the 4th of July and then again I was at the beach for an entire week just recently. I do apologize for the lack of writing, but work has been really busy and then with going away I haven’t had much time to post along with not really being on the computer on the weekends. But I was excited to write this post and my student loan payments still had to be made even though I was on vacation. One of them I was able to make before going away and the other I had scheduled to occur while on vacation, and luckily that went through without any issues which made me happy.

Here are what my loans do look like after making all of my July payments: 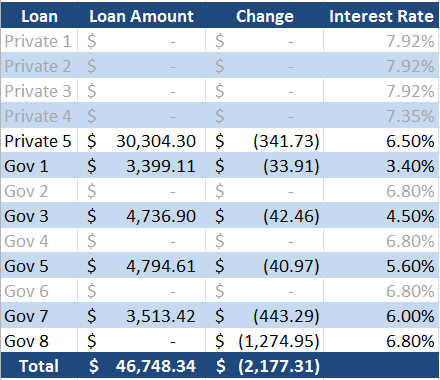 As you can see, I was finally able to pay of Government Loan 8 which also means that I was able to completely eliminate all of my 6.8% interest loans! The highest interest loan that I currently have is only at 6.5% which is now my private loans. I was also able to put a little extra towards Government Loan 7 which is the next highest loan in line. That’s because I had already paid my standard $500 a month towards my private loans and then just did the $1800 towards the government loans, which was more than I needed to completely pay off the other loan.

It feels good to pay off another loan even during a month of high spending, and especially one that will save me the most interest in the long run. I think I will try to pay off Government Student Loan 7 next, even though I know it would save me the most money to go after my Private Loan. There’s just a part of me that really wants to get rid of all these stupid government loans!

Then after getting rid of Government Loan 7 I would go back to my private loan at that point, or do a more even split between the different loans as those are much lower interest. As of right now though I feel my mind is made up to start tackling that 6% interest loan instead even knowing it goes against my whole strategy of using the avalanche method to pay off my loans. I may also try to refinance my private student loan again at even lower rate. My total loan burden is down and my credit score has gone up, so maybe I can get locked into fixed rate closer to 5% with another company.

I have also been keeping a close on eye my goals for the year and decided to add in a third goal just to see how close I can get:

Since July is only the 7th month in the year, and just passed the halfway point it looks like I’m still on pace to blow by what was originally my main goal and even my stretch goal as I had known for a few months. I’ll probably be able to hit my main goal by September. I’ve added in the extra goal of paying $30,000 total towards my principal this year and I’m just on pace to do that right now. I think it is actually realistic to hit this goal now and I’m pushing towards hitting and even surpassing that goal now too.

If I do hit that goal this year, it would leave me with around $30,000 remaining debt at the end of the year. That would then theoretically mean if I could duplicate that effort in 2015 I would be completely debt free by the end of 2015! That is a crazy thought when I first though I’d be in debt for at least 6+ and was terrified to even think about my debt burden.