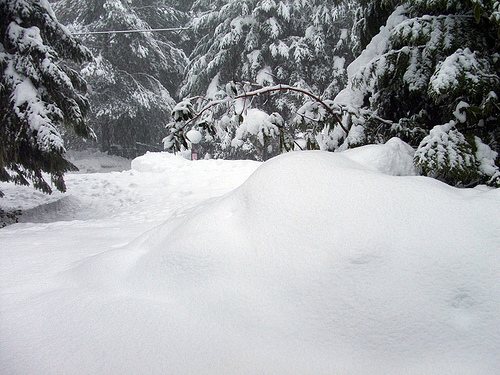 It’s the first month of 2015, and that also mean it’s my first student loan payment for the year. 2014 was a year of great progress for me as I put $27,000 towards the principal on my loans. I was as diligent at tracking my numbers in 2013, but after adding everything up it looks like I put around $21,000 towards my principal from May going forward which makes sense when you add up the numbers. Before I started blogging around then I had only made the minimum payments. My payments had started in December 2012 after the six month grace period, so realistically I had probably only knocked off a few hundred dollars before the first giant payment in May of 2013.

I’m hoping that I can continue that progress from the past two years into 2015 which would be amazing. I’d almost be debt free at the end of three years if I keep up the pace from 2014 which seemed almost impossible upon graduating from school. My loans originally had a term of 10 years and I am personally hoping to cut that term in half. So how did I start off of 2015 you were wondering? Let’s take a look at the numbers for January 2015: 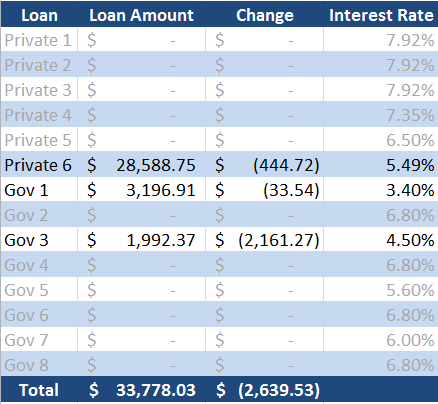 So after making my December payments I now only have three outstanding loans to deal with. The next loan that I’m targeting is Government Loan #3 and that one looks to be completely paid off in March, with just a small amount remaining after next month’s payments. After that I’ll be moving towards tackling my last government student loan, which just happens be Loan #1. It feels good to be talking about the “last” one even if it’s only referring to one type of loan.

I was able to put “extra” towards my student loans this month as I finally received the check from my previous private lender. When refinancing my loans my payment date ended up being on the same date that the loan was fully paid off, so I overpaid the loan by around $550 but had to wait for all the paperwork to be sorted out before I got my money back. I used $500 of that check to put right towards my government loan, so that’s why you see the great progress to start off 2015 on the right foot.

My private student loan is also officially on track again as well, and I have auto payment set up on that loan. I don’t plan on changing that as it looks like there will be no problem with making additional payments towards the principal when the time comes. The auto payment will still process as expected and not cause any weird issues to come up. Going forward the same amount of principal should come off each month, none of the weird issues that happened at the end of 2014! Unless I decide to refinance my private loan again which honestly isn’t outside the realm of possibility for me. See here and here.

I’m happy to be off to a great start in 2015, and I’m expecting to see a few more big payment months within the next few months. I’ll be receiving my bonus (hopefully) soon and then I’ll also be receiving a tax refund, with help from the student loan interest deduction. That should lead to some extra cash for me, and I’ll put some towards my student loans and some towards my retirement accounts.

That said, with planing to move out on my own during 2015 I’m setting the bar a little lower this year compared to the previous years. I don’t see myself hitting over $20,000 towards principal payments this year and it honestly depends on how long I wait until I make the move (will be at least until my government loans are paid off), how expensive moving out is, and how the search for apartments goes. For now I’m setting my target goal at $15,000 paid for the year. I’ll see where it goes from here and if it’s necessary to adjust it upwards, but I don’t plan on adjusting in downwards!