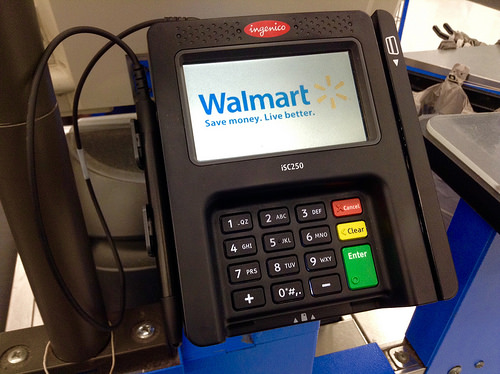 Many of us use credit cards on a daily basis and whether that is for the convenience of not always having to carry cash around, or maybe you are trying to rack up rewards and cash back. But have you ever thought about what exactly goes on behind the scenes when you swipe that credit card? Understanding the processors and banks behind the credit cards can help you understand where exactly your money is going after swiping that piece of plastic.

Let’s say that you receive a form in the mail from Capital One to sign up for a credit card and you are interested in that card. You send the form back in, receive your credit card in the mail a few days later and you’re good to go. Capital One is now considered the issuing bank for your new credit card. But your card will also say Visa on it, this is the credit card network that your bank belongs to and enables them to be on Visa’s network. Any other shop, restaurant, gas station, etc that is also on Visa’s network can accept a payment using your credit card.

Now that you have your new credit card, when you head to the gas station you want to use that card instead of pulling out cash, right? But how did that gas station get to accepting Visa credit cards in the first place? They could have joined the Visa network through Capital One just as you did, but maybe they joined the network through Bank of America. This bank becomes what is known as the acquiring bank and that gas station can now accept payments from Visa credit cards. The acquiring bank will provide the gas station with all the servicing and equipment needed to actually process credit card payments.

So when you finally go to the gas station and swipe your card, the first thing that happens is the authorization. The merchant will send your information to the acquiring bank, to the Visa network, and then to the issuing bank. Your issuing bank will then make sure that the transaction is valid and that you have the correct amount of credit remaining. That response is then sent back through the card network and back to the merchant for settlement.

So even after your transaction is authorized and you have already left the gas station, the transaction doesn’t end just yet. The gas station still needs to receive the money for the transaction since you didn’t provide cash at the time of the transaction. They will get that money back from the issuing bank, but if you paid $20 for gas, the gas station will not get that full $20 back for that sale. Both the credit card processor (Visa) and the two banks are providing a service here, and that costs money in the form of fees.

The acquiring bank (Bank of America in our example) will charge the merchant what is known as a discount rate which might take a flat 2% fee out of that $20. So that gas station will only receive $19.60 of that $20 transaction and pay a 40 cents fee to their acquiring bank. But the acquiring bank will then have to give a portion of that to the issuing bank, which is called the interchange fee and may end up being around 30 cents of the 40 cents that the acquiring bank had originally made. Remember that the issuing bank is taking on the risk by offering you credit, so they are reimbursed for assuming that risk. They can also make additional money off credit card interest paid back by the card holder. So while the risk to the issuing bank is higher, the potential reward is higher.

The credit card network (Visa in this example) will also take a small percentage of this transaction as part of network fees, for providing the link the between the two banks and the gas station. So essentially the issuing bank will get ready to pay back the acquiring bank the $20, but they will deduct their fee of 30 cents sending $19.70 back to the Visa network. Visa then might take out 5 cents for themselves which they then send $19.65 back to the acquiring bank. The acquiring bank will then collect another 5 cents in fees and then pass back $19.60 to the gas station. The final step in the chain would be you (the card holder) paying back the issuing bank the $20 you spent on the transaction. They will make the $.30 in profit, plus any interest you pay, and then the processing network and acquiring bank will also make a small fee. The gas station loses out on some money, but this is normally made up for in receiving a larger amount of customers.

Interchange fees have been a controversial topic in recent years, because as you can see they make up the bulk of the fees that are charged to the merchant and most of that money goes to the issuing bank. Those profits are what enable rewards credit cards to exist, as they often charge a higher interchange fee for those types of cards. Merchants may be forced to build in a “credit card premium” into their prices in order to ensure they are making a profit on both credit and cash transactions. Merchants are now allowed to have a credit card surcharge in the United States as of 2013, but that’s something that is rarely seen. Many states have also banned adding a surcharge for people who pay with credit cards. Instead of baking in the cost to all consumers, the merchant is essentially passing on the interchange fee to only consumers using credit cards. It’s kind of silly and a catch-22 situation. Obviously the costs have to be passed on eventually, but why should they be passed on to customers that are using cash too? But then why would we want to remove the incentive of the ease of use credit cards have provided us?

Australia has already moved to a system that reduced interchange fees that are usually around 1.8% down to 0.5%, and they allowed all merchants to have surcharges for customers paying with credit cards. Unfortunately in a lot of cases, the merchants surcharges actually exceeded the cost they were paying for the interchange fees. Either that or prices were not decreased in relation to the fees being decreased. The consumers saw relatively little or no savings, and instead of being ripped off by the issuing banks they were just ripped off by the actual merchant instead. Rewards credit cards use plummeted and many people ended up switching over to debit card usage. So it seemed mostly like a net loss to consumers, although if you were paying with cash/debit you saw no changes – the savings that the merchants were seeing were just not passed on to the consumer.

So just remember that next time you go to swipe your credit card, it’s a pass through several banks and a credit card network along the way. Fees are being charged along the way, and they will usually be passed onto the consumer in some way or another. I recommend using a rewards credit card and paying off the balance fully each month. This enables you to get back some of those fees for yourself!