Now I don’t know if you are like me – but if you read my first post you’d know that I hated the thought of student loans. I didn’t want to look at them, I didn’t want to acknowledge them, I just wanted them to go away and pretend they weren’t there. Now that I have finally acknowledged them I want to establish a target of actually getting rid of them (not just by hoping they magically dissapear – though if this somehow did happen you wouldn’t hear me complaining).

While living at home is not the optimal solution that I was looking forward to after college, it helps me keep my spending way down and allows to me to put that money towards my loans instead of paying a full rent every month. In this post I’m going to tell you exactly how I plan on paying off these loans, and hopefully establish some sort of timeline!

I have come up with a few scenarios to pay off my loans using the awesome yet simple website called unbury.me. It’s super easy to use as well as modifying once you have already put in all your information – and it’s free. I’m going to be using the avalanche method to pay off my loans, and while the psychological aspect of using the snowball can have its advantages, I think for myself I’ll gain the biggest psychological advantages by paying the least amount of interest possible.

The first scenario I’m going to talk about will be the conservative method of paying off my loans, with trying to aim for $1500 payments a month: 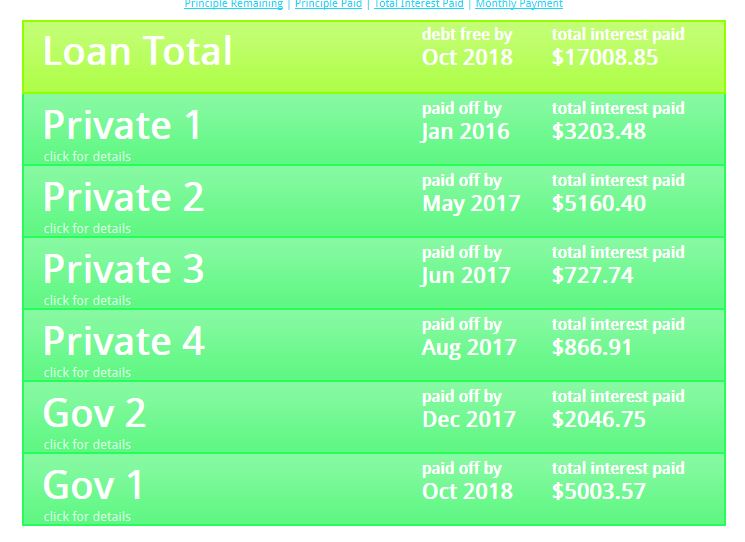 I will have fully paid off my loans in about 5 years, but have paid about $17,000 in interest still. That really sucks – but the 5 years part doesn’t sound TOO terrible.

The second scenario for paying off my loans would be aiming for $2000 payments a month: 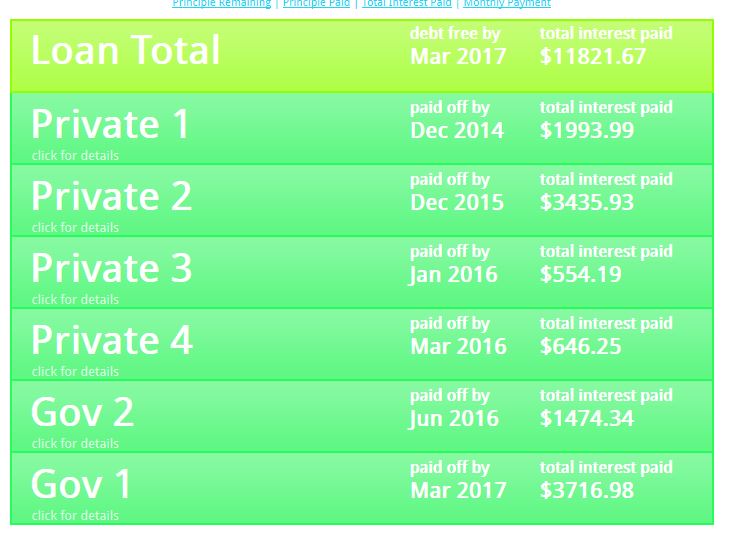 Just for fun, I’ve also done a scenario where I somehow manage to make payments of around $2500 a month just to see how much of a difference that would make: 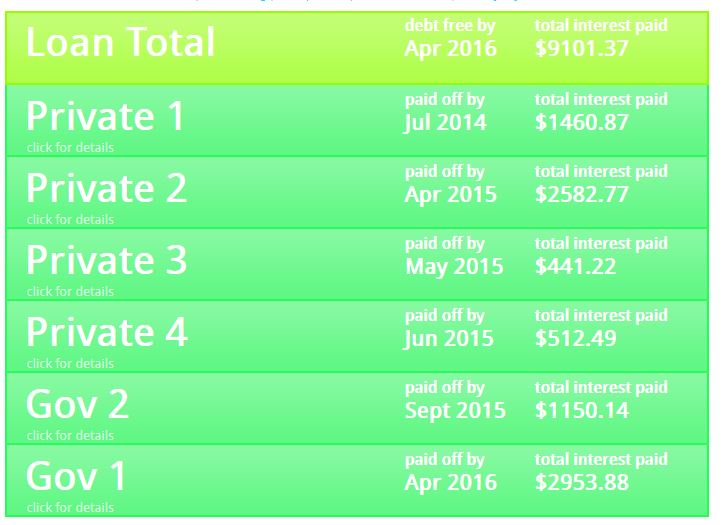 My loans would be fully paid off in just 3 years, and I would end up paying less than $10,000 in interest. Wouldn’t that be awesome? I don’t see this scenario ever playing out realistically though, as great as it sounds. With my fixed expenses it would basically be living with zero spending money each month. The constantly rising cost of gas wouldn’t help my cause either.

I think what I’m going to end up targeting is somewhere in between the $1500-$2000 payments a month and hope to have my loans completely paid off sometime in late 2017/early 2018. Hey, maybe I will even have months where I can strive to get my payments over $2000. I know next month when I use some of my overly large emergency fund to completely eliminate one of the loans I will definitely be over that amount. I hope you too will follow me along in my journey to become debt free and maybe even make progress on your own if you are in a similar situation!