I’m continuing to go through the Summer with higher spending, as I went on vacation again during this past month of July. I was hoping to be able to keep other spending down though to balance that out, and I think I did pretty well with that. There were also no surprise expenses or anything out of the ordinary, which is always a good thing. Not having to pay student loans and only needing a ‘smaller’ contribution to my Roth IRA this month also gave more flexibility to keep spending down. I plan on modifying my budget in the coming months so hopefully I’ll be able to keep things more consistent after those changes. For this month though I’m going to be using the same template that everyone is probably familiar with by now.

Here are the July budget numbers broken down: 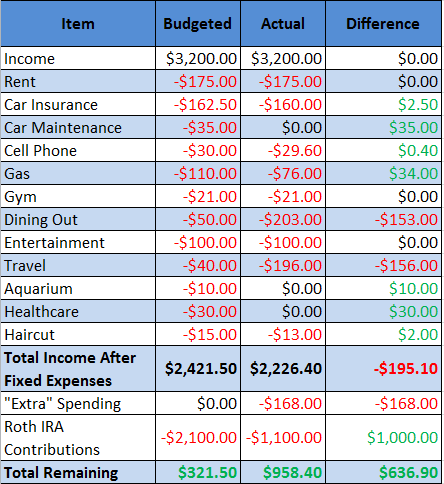 I continue to pay the same amount of “rent” to my parents this month, and my car insurance is back up to the normal payment after making the first payment last month. For now I’m sticking with my same insurance company, though I may be getting some other quotes like I tried doing last year (unsuccessfully). I was also able to decrease my gas spending compared to last month, as I realized I still had one of those gift cards I had purchased a while back still left. Gas prices have also come down around 10-20 cents again which was a welcome change.

Both my cell phone and gym spending are the same as usual, no changes there. Then we get to the dining out category where my spending suddenly skyrocketed! I went out to dinner three times, which I think is what really ending up making this category so expensive. I also went out to lunch once and then to breakfast another time. And it’s not like we went to super expensive restaurants either, this just shows you how quickly going out to eat can really add up.

Entertainment spending consisted of concert tickets once again and going on a brewery tour, which was a lot of fun. I grouped all of the food spending, reservations, tolls and any other miscellaneous expenses during vacation into the travel category to make things easier. I think I did pretty well on the spending there since I have around $480 budgeted for travel each year and most of my travelling occurs during the Summer at this point.

Most of my extra spending was actually from renewing my hosting and domain for this website, which is no problem with me. I really enjoy writing these blog posts and that is considered a necessary expense at this point.

And finally my other budgeting goals:

I’ve completely maxed out my Roth IRA contributions for 2016, and I’m excited to be able to hit that goal so early! Not having student loans has given me a lot of flexibility with budgeting that I didn’t have before. Even though from a budgeting standpoint I came out ahead, my checking account did decrease because of the security deposit I made. I’m hoping to have more information on that in an upcoming post and will also probably be creating a new budget template to use going forward.

My emergency fund basically stayed at the same level, only increase was from the (barely any) interest that my bank gives me. I’m still paying my car loan off at the same pace that I have been, especially since I’ve been investing the money that would have otherwise been spent on the loan. I’m hoping to make more than 2.35% by funding my Roth IRA and increasing my 401k contributions.

How did everyone else do in July, was your spending higher because of the Summer?