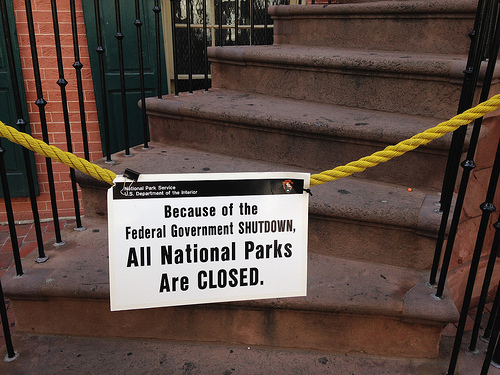 As of yesterday, Congress finally got their act together and struck up a deal to finally end the 16 day government shutdown. I’m not too interested in all the politics behind the shutdown and who is to blame, but I am glad that a resolution was finally able to be reached. The shutdown has not affected me personally in the short term, but it probably will affect all of us down the line in the form of taxes and other repercussions. There were also millions that were in fact personally touched by the shutdown and for that I say shame on you Congress for waiting until the last minute. We can’t keep running the country from emergency to emergency and playing chicken with important issues, that is not how the government is supposed to function.

If we take a look at this from the perspective of the broad market, your 401k and other investments were probably not too dramatically affected this time around. In fact, as long as you didn’t sell anything in a panic you would have most likely come out ahead (depending on what you are invested in). The market went down during the actual shutdown and if a deal hadn’t been reached would have gone much lower, but we are now back to the same levels seen in mid-September.  The S&P 500 closed at $1,695 and is now currently trading at $1,733. That is a record high for that index and the market as a whole is either slightly up or remains flat. My 401k and Roth IRA are both in index funds, so they came out of the crisis slightly up.

Unfortunately, not everyone made off as well as the market did, and individual people were definitely impacted by the government shutdown. Over 800,000 government employees were furloughed and did not receive any pay. A bill was passed that would give these employees back pay after the shutdown, but for anyone living paycheck to paycheck that uncertainty and added stress could not have been fun at all. You also have the contractors and companies that rely on government to actually finish the job, and these workers do not have the benefit of receiving the back pay from the government. The company my Dad works at actually requires government inspectors for many of the things they ship out, as well as having contracts with the government. This created a huge backlog as they were unable to move anything out or receive payments. My job was not affected by the government shutdown.

You also have the small businesses that may rely on the government functioning to make most of their money. If you are an owner of a store or a hotel near a popular national park, they took a huge hit in business which was probably pretty much non-existent during the shutdown. Any tourists that were here to visit our great National Parks or any museums or monuments were denied access. How terrible would it be to spend $1000s on a vacation only to be denied visiting the Park you came to see? That would definitely leave a sour taste in my mouth!

One of the positives that I did read about throughout the shutdown was how great credit Unions have been throughout the whole thing. Many of them were giving government employees 0% loans during the shutdown as long as they were paid back when the employees got their next paycheck. Some credit unions were even going above and beyond that and automatically depositing the same amount as their last direct deposit had been. Just another reason to support your local credit unions instead of Bank of America!

I think the important issue on this whole government shutdown is that you have to make sure your own personal finance is in order before you can worry about bigger picture issues. Even if Congress is going to take their sweet time before each deadline, your energy should be focused on things that are within your control. Whether its getting out of debt, saving for retirement, saving for college, or building up that emergency fund – these are all things that are within your own control.

While this issue is resolved for now, it looks like we have only temporarily dealt with this issue as the next deadline for the budget approaches on January 15 and the debt limit February 7. I guess all we can really do is hold on and watch! Were you or anyone you know affected by the government shutdown at all? If so, how did the shutdown affect you?