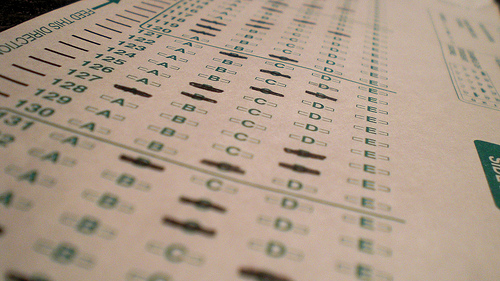 I was recently reading an article on Time that said nearly two-thirds of Americans can’t pass a basic test of financial literacy. That means that almost 66% of people failed the test – I couldn’t believe it! Basic financial literacy? I have a little more faith in our intelligence than that, so I decided to find the actual test itself and take it myself. The test and corresponding survey were done by the FINRA Foundation which self regulates financial markets in the United States. There was some good news from the survey, showing that the amount of people having no difficulty covering their monthly expenses had increased as well as the amount of people who had emergency funds. It also showed that more than half of people who use credit cards pay the balance off each month – the highest percentage since the survey began!

Go ahead and take the quiz yourself if you want before reading my logic going through the question. Warning there are spoilers written just below!

Here is how I went through the quiz and my thoughts in coming up with my answers:

If you are earning 1% a year but inflation is 2% in that year, you have lost money! Inflation states that the average prices of goods increased 2% for that year meaning the actual value of your money decreased by 1%. Inflation is critical to understand not just to hoard your money under a mattress or in a savings account (more than needed for an emergency fund) so that you are not “losing” money. The answer to this question is less.

Have you ever heard of the saying “never put all your eggs in one basket”? The same logic applies to this question. It only takes one bad decision to change everything for a company (see: Enron). For the entire stock market? The chances are much lower and this spreads your risk out. One company going bankrupt won’t destroy your entire portfolio. The answer to this question is false.