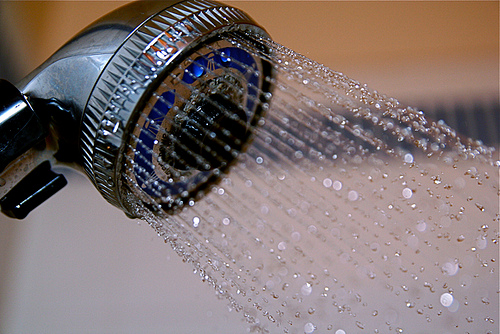 When looking to cut expenses and optimize your budget, sometimes it’s best to take a look at the smaller, recurring expenses. Sure you still want to save on those big, one time expenses and make sure you get the best deal possible but you can also find a lot of savings over the long-term with these smaller everyday expenses. One of the easiest ways I’ve found to do this is by using a low flow shower head and switching out your old one. A shower is something that you (hopefully) take almost every day and uses up a large portion of both your water and heating/gas/electric bill, especially if you have a larger family taking multiple showers a day. If you have someone consistently taking 10+ minute showers the savings will increase even more, but you can also save even more by cutting back on those shower times too.

A couple of years ago my parents were sent a box from the electric company that contained tips on saving money as well as CFL light bulbs and surprisingly a low flow shower head too. I guess it was some sort of “green kit” and they decided to throw the shower head in as an added bonus. My parents installed that shower head and said they didn’t really notice much of a difference. I went off to college so never really thought much of it, but after moving back in I realized with some joking from my parents that my shower head wasn’t a low flow version. I take showers in the morning and I’m definitely one of those people who will just zone out for a few minutes and stand there with the hot water hitting me! I’ve tried to cut back on doing that but I also “invested” in a low flow shower head to try to help out.

The original shower head that I was using was 2.5 GPM which seems to be standard number for most shower heads, and this was actually considered a water saving one as older ones might even use more water! I decided to do some research and based on reviews that I had read, I decided to switch to the Niagara Earth Massage 1.75GPM. I went with the chrome version just because of my shower, but there is also a “spa” version and just a white version of the one that I got. I know that 1.5GPM is the “true” low flow, but some of the reviews made a me a little nervous so I figured I’d start out with 1.75GPM version as just a step down. Plus for only $8 plus shipping, how could I really go wrong with at least trying this out?

The shower head ended up working perfectly for almost a year, I really had no complaints with it. At first it did seem like a little less water but I had no issues rinsing out soap or shampoo (though I do have short hair which makes things easier) and we have pretty good water pressure in our house so after a short adjustment period I really didn’t notice much of a difference. I recently decided to take the plunge to saving even more water and I “downgraded” to the 1.25GPM Niagara shower head in an effort to save even more water. Since I was stepping down from the 1.75GPM to 1.25GPM I don’t think it was as drastic as a change and I haven’t really noticed any difference in my showering once again. It’s only been a month of using this shower head, so I can’t really comment on the longevity but it seems to be the same exact quality of the previous Niagara shower head I was using.

So how much money will you end up saving by using a low flow shower head? Let’s take a look at some estimations.

The cost of water is estimated to be about $2.00 for 1000 gallons [Source]. Looking at some other data, we can estimate a gallon of water to cost around $0.004-$0.005 a gallon which comes out to be $4-$5 per 1000 gallons in some major cities [Source]. Many cities also used tiered pricing if you use more water you pay more at a certain cut off, say 3000 gallons a month. I’ll go with the $2 estimate to make things conservative when it comes to saving.

You will save 280 gallons of water per person using a low flow shower head at 1.5GPM versus a 2.5GPM, not bad at all. That does mean that you will only save 56 cents a person per month though, which doesn’t sound that impressive at first. That’s around $6.50 per person a year. If you are taking longer showers this savings will be even more, and can be even greater if you are also able to cut back on showering time as well.

Most people will also take hot showers, so we have to factor in the cost to heat a gallon of water. This is slightly more complicated, but most people will use either gas or electricity to heat a hot water tank. I’ll save the complicated calculations to do that to Free By 50 and Mr Electricity. Check out those two links if you want to see a more in-depth calculation, but basically it comes out to $0.01-$0.02 to heat one gallon of water. I’ll be using 1.5 cents in my calculations because of that.

Switching from the 2.5GPM to the low flow 1.5GPM shower head will save you around $4.20 a month in heating costs! It might be a bit less because you obviously are heating an entire tank of water each time, so we’ll just go with $4 to be more conservative here. But that still ends up being $48 a year per person.

As you can see, the amount that you will save just from one person using a low flow shower head instead of a standard 2.5GPM shower head is not trivial at $54.50 combined water and heating costs per year. If you extend this over two people your savings go up to $109 a year and for a family of four your savings increase to a whopping $218 a year. That’s a huge chunk of change that you could be investing in retirement, college fund, or even a vacation fund – every year!

And while I highly recommend the Niagara shower heads, the one that my parents have been using has been going strong for over 5 years now so I also recommenced checking out the High Sierra 1.5GPM shower head. This one costs a little bit more at around $30, but is fully manufactured in the USA and because of its design it will basically never clog or wear down. The little holes in the Niagara shower heads can clog over time if you have hard water, but that can easily be fixed with soaking in vinegar. The High Sierra is also pretty popular at schools, campsites, gyms, and other commercial installations because of its effectiveness and the fact that it won’t clog requiring less maintenance.

Honestly I think you can’t go wrong with any of these shower heads, and there are plenty of others out there on the market so do your own research as well. I believe they even make the “rain style” shower heads in a low flow version now – though I personally can’t comment on the effectiveness of that style and using less water. All I do know is that whether you use a 1.25GPM, 1.5GPM, or 1.75GPM shower head you will be saving yourself money with a minimal investment that has the potential to pay for itself in a little as two months. You can also feel good knowing that you are saving some water in general, something that is beneficial to everyone.