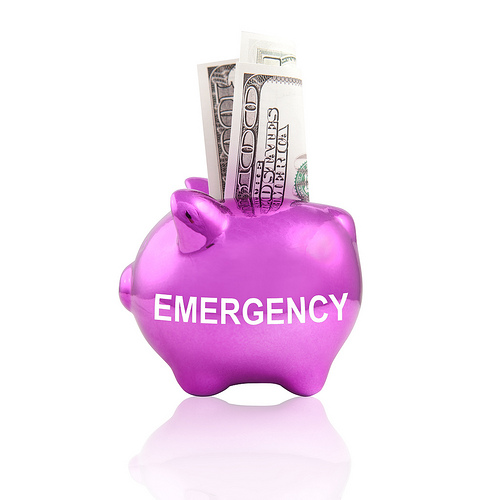 An emergency fund is something that I have been debating over for a while now, and it’s not whether I should keep one or not keep one. I have always been in favor of having an emergency fund, even if I didn’t know that is what I was truly doing. Really I just thought of it as a buffer if I had any car problems, though that’s all an emergency fund basically is, a buffer in case an unexpected expense comes up. The part I had recently been debating over what the size of my emergency fund should be.
I ended up deciding to reduce my emergency fund by $3,500 in September, instead putting that money towards to my student loans. My savings account was earning me 1.25% compared to the guaranteed 7.9% return I got from putting that money towards my student loans instead. That dropped my emergency fund from the $20,000 it had been at to around the $16,500 it is currently sitting at.

Most people would consider this emergency fund to be huge based on my currently salary ($53,000) and I would probably tend to agree, but I do have my reasons for this. In many articles that I have read they suggest building your emergency fund up to $1,000 while paying back debt. My case is slightly different, as I was already saving money during school and had almost $10,000 in my bank account when I graduated. Most of those guides are assuming you have credit card debt and your bank is already down to zero or close to it. So then you save at least $1,000 and put all your free cash to bringing down that debt instead.

This could apply to my situation in reverse, as I do have a pretty steady job and I’m currently living at home for now. My situation is relatively stable, but I just don’t personally feel comfortable with that small of an emergency fund. One major car problem and then another unforeseen incident and that emergency fund is drained. Sure I could probably put that on my credit card and pay it all off before I even have to pay interest, but I just don’t think I feel comfortable with that. I feel like I would need a minimum of at least $5,000 in my account.

There’s also the fact of moving out as soon as possible which leaves me uncertainty of needing furniture, a deposit, etc. If I need to move out sooner rather than later, I would rather have the extra money in my emergency fund now instead of trying to build it up after the move.

Realistically I expect my expenses to be around $1700 a month when I move out, with my student loans fully paid off. That gives me an emergency fund of $10,200 of six months of expenses. In my head I’ve been targeting an emergency fund hovering around $15,000 so it actually doesn’t seem too bad where I am currently at. I have my $10,200 emergency fund plus an extra buffer above that for moving in, vacations, etc. I’m also factoring in the drop when I contribute to my Roth IRA for 2014 like I had previously stated. I think I’m in a pretty good place and I feel much better now than I did keeping $20,000+ in my bank account barely earning any interest. Maybe next month I’ll have to take $1,000 from my emergency fund and put that towards my student loans. Then I will leave it where it’s at, make the full contribution to my Roth IRA and start building back up to $15,000. For this entire time, my emergency fund shouldn’t dip below the $10,200 barring any emergencies. But that’s what I have it for, right?