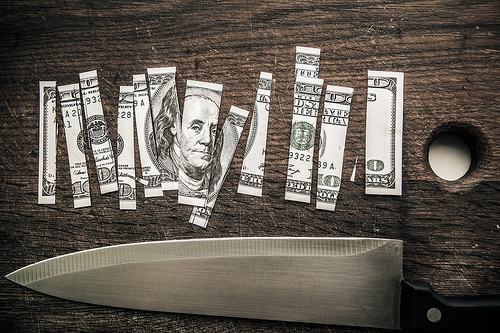 I always try to be a frugal person when it comes to buying goods and services, but I guess another word to use in this situation would be that I’m looking for the best value out of what I’m going to be purchasing. Whether that’s using the cost per weight/item at the grocery store instead of the price at face value or even just buying the store brand instead of the name brand, there are many ways to be frugal and also receive the best value out of what you are getting. You also have to try to look at the overall cost of the item and how long it is going to last you. This is something that I’ve noticed that a lot of people don’t seem to recognize and whether it is clever marketing, not understanding the big picture, or “living in the now” that causes this completely depends on the person. Just because you are being frugal does not mean that you are being cheap.

One of the examples that I like to use is with buying clothes and shoes super cheap. Sure you might be able to buy some $5 shirts and $20 shoes from Wal-Mart, but are you really going to save money? In some cases you may end up saving money but in many cases you might end up wearing those shoes out within a year or having that shirt be super faded after only ten washes, and then you have to go back to the store and purchase the same exact thing. Maybe you could have purchased a higher quality pair of shoes for $70 that have been known to last for 5+ years instead of buying a new $20 pair of shoes every year. You might save around $20 in the long run after that $70 upfront cost, and you’d also save on the time spent going to the store (though I know some of you probably enjoy the shopping/browsing part).

This also doesn’t mean to run to Kohl’s and buy a $15 dollar shirt that is permanently “on sale” and because it’s more money it has to be better value, and of course some Wal-Mart brand items are of great quality. This is not a clear cut decision and this is exactly why you have to use your own judgment as well as other people’s judgment and reviews to figure out what is the best value in the long run.

A more clear cut situation would be finding a substitute item that might cost more initially, but will prevent you from having to purchase additional items in the future. Once you break even on that new item, everything going forward will just be savings in your pocket. One simple example that I’m sure many people have experienced is with toilet paper.

You can buy cheap toilet paper that might not even be 1-ply at 50 cents a roll, but if you are going through that toilet paper 5 times as fast it isn’t going to be better value than the $1.50 name brand roll of toilet paper that is actually 2-ply. You might have bought the cheap one from the start and saved money, but in the long run you’ll just end up spending more on toilet paper.

Another (more costly) example that I always find that can relate to a lot of people is the total cost of a smartphone including the cost of the bill. Let’s say you are able to get a smartphone for only $99 on contract, or even maybe you just pick one of the free ones. The average cost for a smartphone plan is around $80 a month and you are locked into a 2 year deal. You can obviously play around with these numbers a bit depending on how much you actually spend on your phone and your contract.

Let’s now say you switch to a cheaper off-contract plan and either buy an unlocked phone like the Nexus 5, or you buy a slightly used smartphone for around $300. But now your bill may be as low as $25-$50 a month over that 2 years. I’ll go with a middle ground of around $35 a month compared to the original $80 we were paying.

We end up with a total savings of two years of over $800 for a similar service, and while we probably don’t have the latest and greatest smartphone we definitely have a very capable one at this point. And at the end of your 2 years, you will most likely be able to sell that phone for around $100 if you’ve kept it in good shape and in a case. If you keep that same phone for 3 years, the cost savings become even greater for you.

Obviously this is a case of where I find the value of a smartphone to be much less than that $2,000+ price tag over 2 years, but someone else may highly value that smartphone and may constantly want the latest and greatest model. In that case with the price of many smartphones being $500-$600 when they are first released, taking the subsidized smartphone for someone that upgrades constantly may be what is valuable to them.

I personally value taking vacations and visiting new places above a new gadget, but someone else might see otherwise. The point that I’m trying to make is the being frugal is not about trying to be cheap in every single part of your life. It is about finding the things that you love and then trying to save as much as you possibly can in the other areas, so that you can continue to focus on spending money on the things that you love!