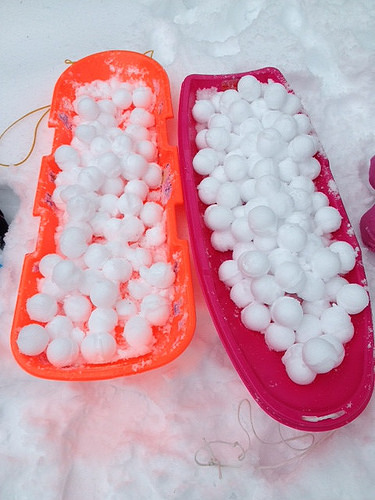 After discussing the avalanche method of paying of debt last week, I want to share with you another method to pay off your debt that has been popularized by many – the snowball method. This another fitting name with the cold weather and snow we have been having around here though. Using the debt snowball method we will largely ignore the interest rates on loan and debt balances and focus on paying off the smallest balance first. You then pay off the next smallest balance once that debt is paid off, and continue on the same payment pattern going forward.

The focus on using the snowball method to pay off your debts is more of a psychological strategy as opposed to a numbers strategy, though there are places where the numbers do end up coming into play. If you are a person who is analytical and wanting to save every dollar (like me!) the snowball method of debt may be confusing to you at first. Why would I want to do this when I can save X amount of dollars using the avalanche method instead?

Well one of the reasons that this method is so popular is that when you are paying off debt for many months or even years, it becomes a tiresome journey. It’s not only a numbers game as much as the psychological burden really takes its toll on you. Many people are very goal-oriented and enjoy seeing the progress of meeting these goals sooner rather than later.

The snowball method fits perfectly into this category and helps to motivate to pay off your debts. Which situation is better?

Hopefully you picked option 2 at the better situation! Obviously situations aren’t really as clear-cut as that example in real life, but it should illustrate the point I am trying to make. Sticking to your repayment from an overall perspective is much more important than saving a few hundred dollars. If you are able to do both, that is great. But if you are struggling with this you may want to consider switching over to the snowball method of debt.

With the snowball method you can potentially optimize your numbers as well, and even though it might not as perfect as the avalanche method you can still save money on interest. If you have one loan at a $8,000 balance and a 9.5% interest rate and then another loan at a $7,000 at 5.5% in that case I would pick the $8,000 to target as your first loan to pay off. You’ll still end up with a relatively quick “win” and you’ll also save by paying off the higher interest loan first!

So to summarize, the snowball method is very easy to follow. You put the most of amount of money you can towards your smallest debt but still make sure to pay the minimum payments on the rest of your loans. Once you pay off that first debt, you shift the extra money towards the next smallest loan and so on until you’re debt free. This creates a “snowball effect” in that the extra money you put towards those loans is kind of like a snowball rolling down a hill gathering more and more snow!