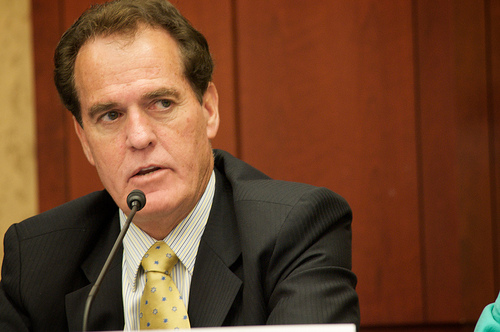 What would you do if you suddenly were given the option to take a job that would guarantee you of a salary of $172,000? Maybe you could move your retirement plans that much earlier, save more in your children’s 529 plan, or really start saving for a down payment for a house. Maybe you are already making that much, or even more! I know most of us aren’t though.  I would probably start to pay down my debt at about three times the current rate I’m paying off my loans. Why the number $172,000 you might ask? That is the salary of Congressmen Phil Gingrey. He is in fact making $172,000 a year in Congress but apparently that just isn’t enough for him.
I am not taking any sides here before anyone claims I am attacking one party, I don’t really care for Republics or Democrats – I don’t trust either of them! And what I really think is the worst part about his complaint is that he says he is “stuck” there making that much. Newsflash Mr. Gingrey – nobody forced you to run for office and if your job is such a dead-end job, I’ll gladly take it off your hands. You can quit right now if you feel that stuck and search for a job elsewhere. and I think most people would be happy enough with a dead-end job if the salary was that high to compensate. It doesn’t hurt that Congress also receive benefits, a retirement plan, and plenty of other perks for working in Congress. Not to mention the wasted taxpayer dollars that Congress uses to entertain their guests.

He willingly signed up to run for office and his salary was known to him before even “applying” for the job. Everything is out there in the open and there is full disclosure, and then he has the nerve to complain about his six figure salary. There are people making half his salary that are probably doing twice the work. Heck, I’m sure the Congressional aides that he employs are working their asses off each and every day.

In most jobs if some sort of “approval rating” was tied to job performance or a job review, you would most likely not receiving a raise and probably getting fired if you had a report card like Congress does. Maxing out at an approval rating of 24% and bottoming out at a approval rating of 10% the results are pretty telling. And we are quickly approaching another deadline with Congress at a standstill for a decision on the debt ceiling by October 1st, which is causing the market (and most likely your 401k) to tank and a looming government shutdown. I could see if Phil Gingrey had a salary of $50,000 and was working hard to do what the people who voted him into office wanted to do, but he’s making $172,000 and is part of a Congress that is quite simply incompetent.

I think that if Phil Gingrey’s salary is that much of a burden to him, he should really try working at a minimum wage job like someone struggling to make ends meet. Then he can get a feel for what a real dead end job is. He is a representative in Georgia and it looks like the median salary in his Congressional district is anywhere from $41,000-$56,000 depending on the town or area you select. It seems that with Mr. Gingrey’s salary of $172,000 that is much higher than the median salary of the exact people he is representing. Gingrey MIGHT have a point if he were talking to people living in downtown Manhattan or the bay area in San Fransisco, but those people know what they are getting into. The salaries are higher in these areas to compensate for the extremely high cost of living, and a six-figure salary is still nothing to scoff at.

There is also the fact that we are just looking at the total compensation for Rep. Gingrey as well, if we look at the actual value of his salary it actually comes out to be much better than you would originally think. $172,000 would be around $80-$90/hour depending on how much vacation and holidays you got working a 40 hour work week. Congress worked for 112 days in 2012 and 113 days in 2012, which would push his hourly wages much closer to $190/hour. I realize that Congress does other things as well, so we are probably looking at closer to $130-$150/hour – not too bad for a part-time gig. This is also leads to Congress getting a lot more vacation time – whether that is paid or unpaid than almost every worker in America.

I just find it crazy that so many of the people we elect are so out of touch with reality and what their constituents really want and deal with on a daily basis, yet some of them get re-elected regulary. This isn’t even the first time that Phil Gingrey has said something stupid that he later regretted. It’s usually the same process too, elected official does something morally or ethically wrong, office denies it or they issue apology, and it blows over. There are very rarely any repercussions for the people that are supposed to be representing us. The disconnect between politicians and the American people is unreal.

Representative Gingrey can be contacted here if you feel the need to offer your condolences to him for being stuck in his dead-end job.