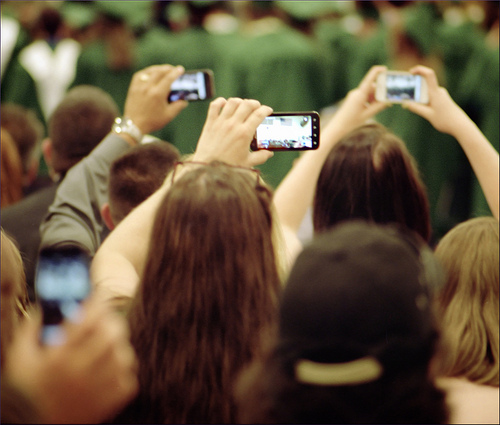 Everywhere you look around you today, someone is most likely going to have their smartphone out. Whether it’s talking, texting, browsing the internet, or playing a game people have integrated their smartphones into daily life. And it seems most of the time it is rightfully so – smartphones are incredibly useful as we now have the power of the internet right at our fingertips and are able to look anything up on the spot. Now you can even play games that are as advanced as we were playing on TVs and computers as little as 10 years ago – all on a device that fits in your pocket. As of now though, I am surprisingly not one of these people.I am someone that loves technology, loves new gadgets. I’m a recent 20-something college graduate and it seems like I would perfectly fit the demographic of a smartphone user, but I have never owned one. I currently have a feature phone and have never owned a smartphone. Yes, it has a touch screen but it still has a slideout QWERTY keyboard and only has the most basic of functions. I also don’t pay for a data plan, so most of the extra functions that my phone even does have, I don’t really end up using them.

I’ve been paying for my share of the cell phone plan pretty much ever since I had my first job. My dad receives a 20% discount from Verizon so we have ended up sticking with them, even though they are still a rip off even with the discount. Unfortunately their coverage can’t really be matched by any cheaper providers in our area. We aren’t really in a big city, and it wasn’t until recently where you could pretty much only count reliably on Verizon and AT&T in this area. I knew someone that had T-Mobile and most of the time they just had no signal. I’ve been trying to convince my parents to switch to a MVNO but they are still skeptical about it.

Going back to paying for my own portion of my cellphone bill, this all started when I wanted to get unlimited texting. I think I was around $10 a month for having my line, and texting was really starting to get popular. I wanted to be able to text all my friends and i think unlimited texting was $20. My parents agreed to let me add that in for $20 a month and I’ve been basically paying that ever since. I think with new way you can bundle texting in, it may actually only be $20 for my line now since none of have data. When smartphones came along, my parents told me the same thing about paying for data but I decided that wasn’t really in my budget and that it wasn’t really money I wanted to part with.

Now almost all my coworkers have iPhones, and are always telling me I’m going to end up getting one when it comes time for my next “upgrade” through Verizon. I always tell them that I don’t really need data, I just need a phone and texting but they say once I have it I’ll understand and won’t be able to do without it. For some reason, I don’t think that is really the case as I’ve survived this long without it. Free wifi is plentiful and while there are certain situations that it would definitely come in handy but I have never though to myself that I absolutely NEED data.

I know I eventually will get a smartphone, but that may not even be until I move out. One thing I do know that as of now I wont be getting a smartphone with Verizon or AT&T because I can’t justify paying for those prices. Why can’t I get a smartphone and not pay for data?! It’s ridiculous that they require it when 90% of the time I will have wifi available to me. My girlfriend was with AT&T for a while, but after some research as soon as her contract expired she switched over to the MVNO, Ting. It’s much cheaper and you pay for what you use. When I do switch to a smartphone it will be through a MVNO provider and will most likely not be an iPhone unless I find a good provider and a good deal on a used one. So I think the answer for now is still the same, that I don’t really need a smartphone

Do you currently own a smartphone? If you do, are you with Verizon and AT&T or have you opted to go with someone else?