It seems like I have finally sorted out my issues with FedLoan Servicing, at least my present and (hopefully) future issues. My paid ahead status has finally been permanently removed, and I manually entered in each amount as I had wrote about in my last student loan update. I was told on the phone that they would be fixing my original payment, but I haven’t received any update on that. I sent a follow-up e-mail as well as sending a certified letter in the mail last week but still haven’t seen any change there either. They are probably going to say that it is too far in the past now that I have made an additional payment, even after all the complaints I sent them before that. Oh well, guess it might just be time to move on from that – until the next issue occurs.

I did want to take some time to write a post showing you my frustrations with their system and just some simple ways they would be able to prevent a lot of these problems in the future. But I doubt that would do that, because that’s probably how they make extra money – by tricking people. From all my dealings with this company I can only think of one word to describe them and that is scummy. It’s not like they are doing anything illegal, there are just obviously no moral standards here. The system is designed to keep students paying for as long as possible and extracting as much interest out of them as possible. 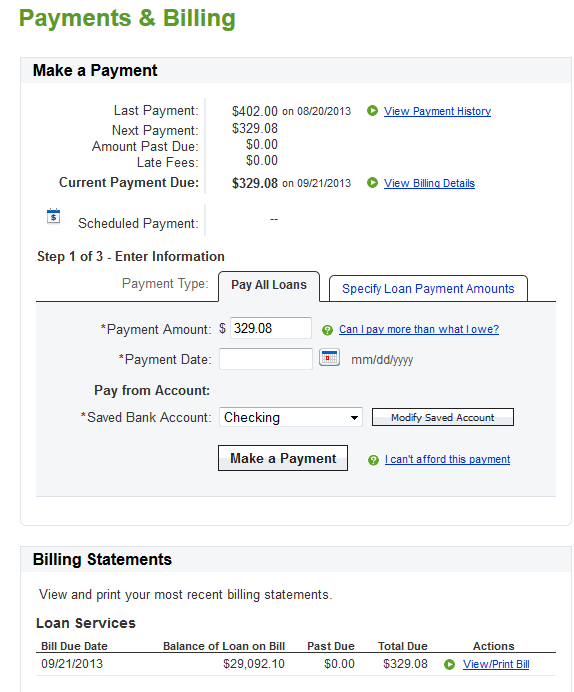 As you can see, it looks pretty standard. This is the screen that I first used in my first payment, assuming it would be distributed equally between the loans or be weighted in some sort of way like the last website I used. Instead it seems like they randomly decided to put more money towards lower interest loans and not reduce the principal at all on some of my other loans. FedLoan Servicing really needs a way to show how your money is going to be divided up before you hit make a payment. You should be able to adjust that main number and the individual amounts would adjust accordingly. This would prevent any issues and you could see exactly where your money is going.

There is also no indication that any extra money will go towards future payments, and not towards the principal that month. In fact the pop-up box actually seems to state otherwise:

It doesn’t necessarily state either way, but I would assume “reducing your principal balance” would mean within the current month to most people. They need a warning here stating if you have paid ahead status on (the default) it will not quite work this way.

Now I’m moving on to the next tab, the “Specify Loan Payment Amounts” tab: 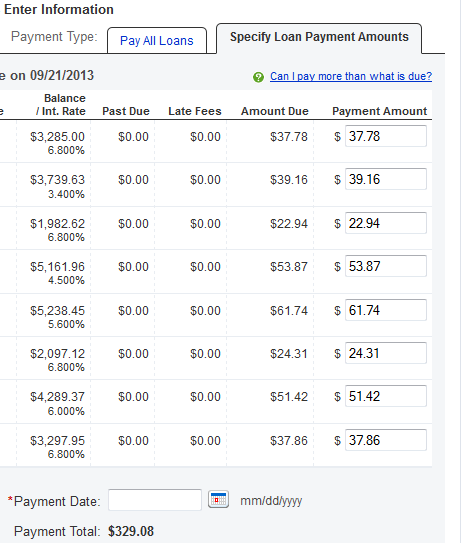 As you can see here – I finally have all my payments due this month! Previously half my loans would show $0 due because of the annoying paid ahead status. The only problem is that this screen is also lacking information as opposed to my previous lender and my private loan company. All this screen shows me is the “amount due”, but that’s really not that helpful. So far FedLoan Servicing seems to be the only company that does it this way. I just know that is my minimum payment which is great and all, but there needs to be two more columns showing what is going to interest and what is going to principal. With how my previous months were going, I had to manually go back and check each loan to make sure the minimum payment was covering the interest which it was not. So someone that hadn’t checked that would think everything is going fine when in reality their loans could actually be growing in size!

I really don’t think it would be too difficult for FedLoan Servicing to display some extra information here, and it would go a long way in helping people. Even their mailed loan payments each month show the same information of “amount due” – you have to login and click each loan one-by-one to see how much interest has accrued. It’s not too bad, but never do they show it in the same place or when you are making your payment. It would be nice if they at least showed this in the mailed version next to my amount due so I can see how much of that minimum payment the interest is making up. I doubt anything will be changing with them anytime soon though, so for now I will just make sure to be extra careful before submitting anything on their website and making sure to send a certified letter to document any changes or communications that need to be made.